A group of seasoned investors have mounted a campaign to prevent MtGox falling into the hands of the Receiver. In an open letter the Group, which includes Wall St vet John Betts and tech investors William Quigley and Matthew Roszak, hope to convince some of the 127000 customers and creditors to back their plans which would include the partial return of their assets.

To date the troubled exchange has yet to have a hearing on its future and remains non-trading. Following the theft of over $400m in bitcoins earlier in the year a number of attempts have been made to recover them by technical means, including tracing their movement through the bitcoin network. However, only a fraction have been recovered, leaving MtGox insolvent.

Under their proposal, the investment group would see a redistribution of the remaining 200000 bitcoins to former customers in exchange for allowing the platform to remain trading. Creditors would have their debt renegotiated and moved to the new firm, being repaid from future operational profits. Reinvestment and relaunch would then bring the former exchange, which at its height was the world’s largest, back online.

The offer has been met with caution but is the first such offer that has the MtGox platform remain as a going concern. Certainly the investment group are well placed to save MtGox and well motivated; they would be protecting their substantial investments in other bitcoin companies by shoring up the general damage MtGox has done to the reputation of all cryptocurrencies. However, given that no formal hearing has been set by the Tokyo insolvency courts, and given the legal difficulties faced by its former CEO, many are likely to remain cautious. Many more believe that MtGox should fold to restore faith in the currency itself.

Bitcoin continues to trade on other exchanges at $500, around half of its peak value prior to the MtGox hack. 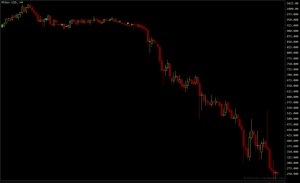